This week’s card is 15 Emotions Passing Through 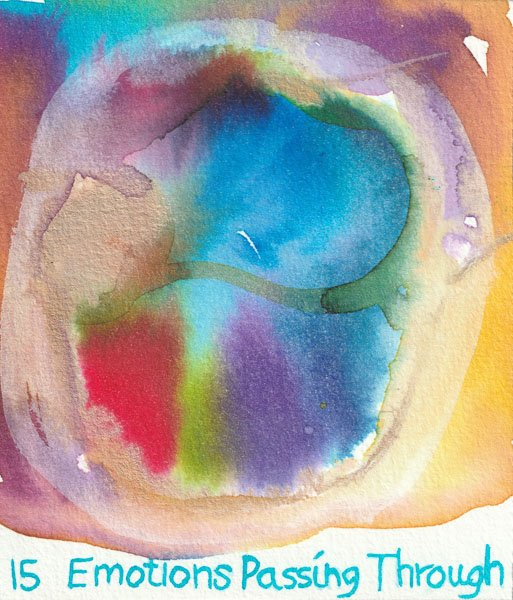 I used to be disabled by my emotions.  I thought that what I felt meant something more than it actually did.  I would feel something and believe that it was ‘true’.  I then had to wrap a story around the way I felt so that I could ‘make sense’ of it.  I would then act as though my rationale was real and create situations that did not need to play out if I had only understood the error I was making.  It’s no wonder that until my late thirties, I spent a good amount of energy wondering if I was a bit crazy.  I had no resourceful way to name, feel and process my emotions without making myself and/or other people ‘wrong’.

The only pain in life is caused by an unchallenged thought.

The work of Byron Katie helped me to see the error of my ways.   I was trying to ‘make sense’ of an emotion rather than simply noticing it, naming it and letting it pass through.  I didn’t realise that I didn’t have to ‘understand’ how I felt.  I could just feel it and use it as feedback.  I learnt that it’s ok to feel without having to justify every sensation; it’s vital in fact.  Many of us are so used to ‘stuffing down’ any emotion that feels remotely uncomfortable, that we are afraid to experience the full range of our feelings.  But there is a problem inherent in this approach; whatever is supressed builds up pressure. Sooner or later it will ‘irrationally’ explode causing devastation in our lives or implode and cause physical, mental or emotional issues to manifest.

At the end of a 12-year relationship with the father of my children, I couldn’t navigate my emotions.  I didn’t know what to do with everything I felt.  Wave after wave of malaise washed over me for weeks on end.  I thought my sadness would never be over.  How had it come to this?  With help, I began to recognise that for countless years I had made myself wrong.  I’d sold out on myself so many times in many significant and myriad tiny ways.  I’d neglected to put healthy relationship boundaries in place.  I considered it my job to make my friends and partner happy (giving my power away to the idea that it was his job to make me content in return).

In time my sorrow turned to rage, but I was so accustomed to not allowing myself to authentically feel that I didn’t recognise my anger.  To me it felt like a restlessness that I couldn’t get rid of no matter how much coaching, spirituality and self-development I invested in.  I actually wondered at one point if it was excitement. At times it felt like the need for revenge.  Other days it felt like I simply couldn’t house all the power I was feeling.  It was an unnamed sensation that was ‘stuck’ and had no place to go. I thought perhaps I needed more exercise, so I started walking for miles and miles a day, but that didn’t shift it.  I worked with the themes of unconditional love and deep forgiveness; it helped a lot, but the unnamed emotion was still there.

With continued curiosity, I realised that what I was feeling was white hot rage; anger the depth of which I never imagined possible.  I felt sick to the pit of my stomach; this was not the feelings of a ‘good girl’.  This was not ‘professional’, or ‘productive’, or ‘grateful’, or any of the other ‘manifesting emotions’ I longed to feel instead.  Once I knew what it was, my rage turned volcanic.  I had to let it out; it was my inner wisdom teaching me that ‘stuffing stuff down’ was no longer a strategy that would work for me.  I felt my rage boil inside; it felt like jet fuel.  I felt high!  My solitary walks deep into the countryside became the safe place for me to scream the torrent of abuse that needed to be released;  an unwitnessed space to look and feel ugly; to spit, swear and punch the air.

Just when I thought the strength of my emotions would overcome me completely, it began to ease.  It ebbed into fierce self-protection and self-love.  It solidified into resolve that never again would I allow myself to not be heard by the one person who was always there for me; me.  It was one of the most important and liberating lessons I had learned to date.

Now I know that its ok to acknowledge and feel any emotion.  I don’t have to label it as ‘right’ or ‘wrong’. I can simply observe it, be with it a while and let it pass through.  Feelings are feedback, but they don’t have to mean anything.  I notice my emotion, acknowledge it, mine it for any useful insights and then let it go. I feel a huge sense of personal empowerment and peace as a result.

Sending love and strength to you whatever you might be feeling at this time.

I hope you’ve enjoyed this week’s connection to your inner wisdom.

As always, I’d love to hear your comments below.

If you’d like to learn more about The Wisdom of Change oracle deck you can find out more here.

If you'd like to find out more about a Wisdom of Change reading with Wendy please click here.